We had a selfie with Hagyó on the Subway line 4!

Today Budapest is celebrating the Subway line 4 with a surprising party exemption. The whole media, competent and amateurs, oranges and red, passengers and BKV workers exalt the final form of the gigantic project.


And true what is true, it’s just enough to go down to one-one station to be completely floored for its own world and for the visions from the forms, shapes, devices and surfaces. I1m not going to even gush more about it, see it if you can.

We thought that we will ask a person on the presentation day, who was concerned in a more deeply way into the project just to cut the strip. Thus through his lawyer we contacted Miklós Hagyó former socialist deputy lord mayor, who – although didn’t cut a stripe today – was responsible for the investment during his office period and (since then it turned out that wrongly, without a reason, with fake cause) he was in pre-trial detention for it.


Miklós Hagyó in the beginning – kept himself for his muteness in the last 4 years – didn’t want to declare, however he called us back during the day to send a short message to everyone who was concerned with the building operations. He did it in this way without any verbal comment: 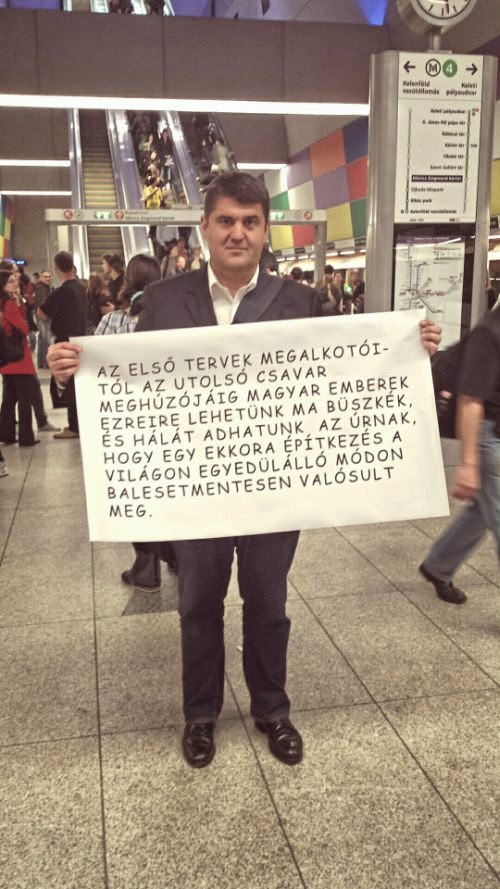 „From the people who created the idea to the person who pull the last screw, we, thousands of Hungarian people can be proud and we can thank to God that a big building operation like this came true uniquely in the world without any accident.”

They can start the Hagyó case from the beginning


There is still no owner for the notorious crimes, for the BKV scandal, for the 15 billion MVM misappropriations or for the Sukoró case. All of these were started in the countryside, but after the decision from the Constitutional Court about the case transferences, the cases had been stopped, because the courts in the countryside didn’t keep being competent anymore.

The special cases can be stopped for maximum 3 months without consequences. By this time we already overstepped the 3 months round, so it seems like that now it doesn’t matter anymore that what court will be the competent, they have to start over all the special cases. 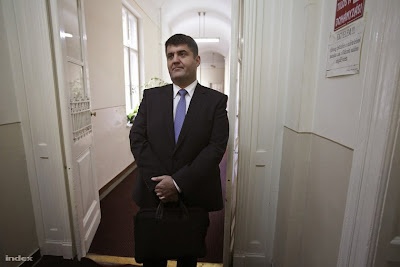 On 13th of June, 2012 the criminal suit of Miklós Hagyó, former deputy lord mayor and his fellows started on the Kecskemét Tribunal. Photo: Huszti István / Index

The arguments about the unclaimed notorious cases came so far for now that – it seems like – that it sure that they have to start them over, independently from that fact that in which court will the cases continue. These are those difficult, big cases what the transferred to countryside court because of the workload of the Budapest’s court: such as the BKV scandal which was transferred to Kecskemét, or the former MVM leader, István Kocsis’s 15 billion misappropriation case which started in Kaposvár. The status of these cases fell over when the Constitutional Court in the beginning of December said that the former law which was the basis of the case transferences was unconstitutional and it had been already repealed. First it said that the decision of the Constitutional Court doesn’t influence the pending cases because the Constitutional Court rejected the proposal when they asked the extermination of the dockets of the transferences.
További bejegyzések »
Bejegyezte: Unknown dátum: 11:29 Nincsenek megjegyzések:

Hungary, An Election in Question, Part 5

This is the final post of a new series from my Princeton colleague Kim Lane Scheppele, head of Princeton’s Law and Public Affairs Program.
Hungary: An Election in Question
Part V: The Unequal Campaign
Princeton University and the Institute for Advanced Studies, Princeton
24 February 2014

Officially, the election campaign in Hungary starts 50 days before an election, so the race began in earnest on 15 February for the 6 April election. Once the campaign period starts in Hungary, special rules ensure that all parties are treated equally.
But as Anatole France once said, “In its majestic equality, the law forbids rich and poor alike to sleep under bridges, beg in the streets, and steal loaves of bread.”

We’ve already seen how the new system in Hungary was designed to push opposition parties into an uncomfortable alliance and to require they win by a substantial margin to win at all. And we’ve seen how the system of minority and foreign voting has opened the doors for Fidesz voters while closing them to those who would vote for opposition parties.
Not surprisingly, the rules for the campaign period itself also have a similar logic.

How Did Hungary’s Election Become a Circus?


BUDAPEST — THE most visible poster on the streets here is not the one advertising the Deep Purple concert at the Papp Laszlo Sportarena. And it’s not the one for “Balkan Kobra,” a theatrical comedy featuring a stubbly hero sporting tight jeans and a Kalashnikov. And it’s definitely not the one for the Budapest Dance Festival.

Instead, it’s the one that shows three or four guys wearing neckties standing in a police lineup, alongside a clown. In one of the more ubiquitous versions of the poster, two of the men are former left-wing prime ministers of Hungary. A third is Attila Mesterhazy, president of the country’s Socialist Party and a current candidate for prime minister in the coming election in April. The fourth is Miklos Hagyo, the former left-wing deputy mayor of Budapest, who is currently the subject of a corruption trial.

An ad from a pro-ruling-party group features opposition politicians, a clown and the tag line “They Don’t Deserve Another Chance.” Credit Akos Stiller for The New York Times

The men, and the clown, appear above the slogan “They Don’t Deserve Another Chance.”

Given that political advertising has been sharply and abruptly curtailed by Prime Minister Viktor Orban and his ruling Fidesz Party, the pre-eminence of a political ad — on billboards, lampposts and the sides of buses — might seem surprising. But Fidesz, which has been widely criticized as taking Hungary in an autocratic direction since taking power in 2010, has become adept at controlling the message. It has rewritten the state’s Constitution, come to dominate all branches of government and held increasing sway over the news media. Meanwhile, according to the International Monetary Fund, Hungary’s economic output is not expected to return to 2008 levels until 2017.