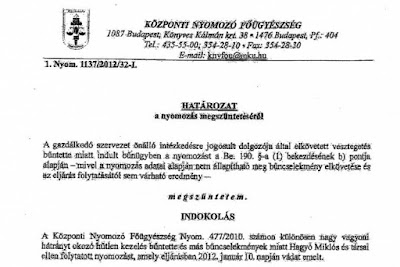 
The investigation was dropped


Before the municipal elections

Hagyó was arrested after the parliamentary elections, on May 14, 2010 – and he was suspected of bribery in relation with the Nokia-box case on August 30, 2010 before the municipal elections. Although in the indictment the term “Nokia-box” does not appear, based on Balogh’s statements it is referred that in March 2008 Hagyó instructed Balogh, the Assigned Chief Executive Officer of the BKV, to deliver him 15 million forint on a yearly basis, threatening him to emphasize his wish-fulfillment. In the indictment it is also recorded that in both 2008 and 2009 Balogh delivered 15 million forints as unfair benefit to Hagyó. In 2010 Balogh said the following to Magyar Nemzet: Since then I am aware of the fact that 15 million forint can be fitted in a Nokia-box, as once I delivered the required amount in it.”

The former Deputy Lord Mayor of MSZP, during the interrogation conducted in summer, 2010 stated that “he did not commit either this specific crime or any other.” In his statement made before the court Miklós Hagyó also added that during the two-and-a-half-year investigation the person from whom Balogh supposedly took over the 15 million forint as the “commission” of a BKV-tender was not questioned at all. It was also assessed by the court at the beginning of the procedure that in the case of bribery there was no concrete investigation carried out. Only after this, in November 2012, the Prosecutor’s Office initiated the investigation to find out if Balogh’s incriminatory testimony is supported by any evidence.


The investigation dropped in the lack of evidence aimed at gathering follow-up evidence to support Balogh’s statements - at least Imre Keresztes, Chief Prosecutor, provided a 17-page-long description on the details pointing out that there was no evidence found either unequivocally supporting  or refuting Balogh’s statements on the deliveries of the money.

It was reported by the Origo, that the former prosecutor who succeeded to have the former Deputy Lord Mayor of MSZP in custody appears on the list of Tarlós’s advisors by the name of her husband’s with a monthly salary of 850 thousand forints. Former counter intelligence agents and former police officers involved in the BKV-case are employed by the capital city, as well.