Here is the list: policemen, prosecutors and judges proving their loyalty to Orban earn millions

A couple of days ago it was revealed that Zsolt Nagy, ex-investigator responsible for the Hagyó-case, earns a million per month at the BKV. However, he is not the only one who has been assigned a position of a competitive salary in return for their services and loyalty. Although, since then it has become obvious that - putting it slightly - they committed a bunch of “professional mistakes”. 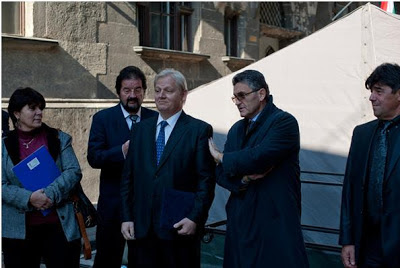 The prosecution has failed to prove the charges against Hagyó and his co-defendants. Before the court the defendants and the witnesses talked about their earlier statements as given under coercion. Zsolt Balogh withdrew his story about the Nokia-boxes two and a half year ago. What is more, in March 2015 he publicly apologised to the ones who he had incriminated with his false statements. Finally, the prosecution also admitted that his story about the corrupt money cannot be proved with evidence. This, however, has not meant a hindrance to reward all the policemen, lawyers, prosecutors and judges acting according to the political interest.


Zsolt Nagy, the investigator responsible for the BKV-case
His role in the BKV case:
As an investigator Zsolt Nagy took a considerable part in the investigation of the Hagyó-case – professionalism of which is more than questionable.
His reward:
Currently in his position Zsolt Nagy as an expert in corporate security is primarily responsible for granting authorisations, furthermore he provides a direct service in the “national economic interests” with special focus on the most effective drawdown of EU funds. He does all of these for 1.1 million forints a month. His efforts are also rewarded with a premium of 40%, moreover a mobile phone and a Skoda Octavia to his own use were also made available for him.

György Pető, Tarlós’s right-hand man
His role in the BKV case:
György Pető, István Tarlós’s right-hand man, was considered to be Hagyó’s adversary in the political infighting within MSZP. For this very reason, it is more than interesting that in 2009 he became responsible for the BKV-case when he had just started to work at the BRFK. His well-known conflict with Hagyó puts the evidence of the investigation in a different light.
His reward:
In October, 2010 Tarlós proposed him for leading positions at the newly established Budapest Security Office (FBI) belonging to the Lord Mayor’s Office and at the Budapest Maintenance of the Public Places (FKF). Currently, he works together more of his ex-colleagues fostering strong relationship with the police and the secret service, such as Ottó Halász who conducted Hagyó’s interrogation.

Ottó Halász, Hagyó’s interrogator
His role in the BKV case:
On 14 May, 2010 Halász took part in Hagyó’s interrogation, and he was also present at Péter Bielek’s (ex-Chief Executive Officer of FKF) and Lajos Kovács’s (ex-Chief Executive Officer of Főtáv) interrogations. Furthermore, Halász was also involved in the only interrogation conducted in connection with Gábor Demszky’s – the ex-Lord Mayor - case.
His reward:
He became the deputy team leader of the elite 30-member security board at the Budapest Maintenance of the Public Places Ltd. (FKF). (Among the members we can find more ex-investigators taking part in the investigations against the public utilities of Budapest in 2010)

Gábor Tóth, Chief of Police
His role in the BKV case:
The investigation in the BKV-case and the reported coercion took place when Gábor Tóth was the Chief Police. Tóth initiated a criminal procedure despite the fact that two internal examinations found everything rightful. Furthermore, he personally confirmed the existence of the data indicating Hagyó’s intention to escape, referring to which Hagyó was put in pre-trial detention - later the data were proved not to exist.
His reward:
After the Fidesz seized power in 2010 Tarlós expressed his need for Gábor Tóth, as well. He was appointed as the supervisor of a public security working group at the Municipality of Budapest by the Lord Mayor – there Tóth can work together with more of his ex colleagues and police higher-ups.

Iván Szabó, Zsolt Balogh’s lawyer
His role in the BKV case:
Ivan Szabó is referred to as “the lawyer of Fidesz” since his attorney office - as the legal representative of the Fidesz-related Municipality of Pécs - played an important role in taking back the ownership of the Waterworks of Pécs and in performing the company invasion actions of the Hungarian Development Bank. Then it is not a surprise that Szabó undertook Zsolt Balogh’s - the inventor of the Nokia-Boxes stuffed with money - legal representation.
His reward:
Besides the state orders, Iván Szabó was also rewarded with appointments and awards by the Orbán government – it is quite a challenge to list: he became the president of the Supervisory Board of the state owned Szerencsejáték Ltd., the delegate of the KDNP (Christian Democrats People’s Party), the coalition partner of the Fidesz in the National Election Committee, member of the execution board of the Tettye Forrásház Ltd., co-president of the Ethical Committee of the Hungarian Water Utility Association (MaVíz). Finally, he was awarded with the Officer’s Cross of the Order of Merit of the Republic of Hungary by Orbán. In 2013 he became the member of the supervisory board of the Hungarian Development Bank.

Imre Keresztes, Chief Prosecutor
His role in the BKV case:
As the Chief Prosecutor of the High Prosecutor’s Office of Central Investigations he had a role in Hagyó’s being taken into custody and its three-time prolongation – altogether for 9 months – without reasonable justification.
His reward:
He was awarded with the Order of Merit of the Republic of Hungary, Commander’s Cross “as the acknowledgement of his productive prosecutory and executive career, furthermore his achievement in investigations conducted in cases of complicated facts, which attracted the interest of the public and their legal assessment was complex.”

György Győri, Prosecutor
His role in the BKV case:
In his prosecutor status Győri redrafted the testimony given by one of the witnesses. Since the original statement was not “believable” enough it needed to be redrafted in order that the testimony be as outright as the lies on which it was based on.
His reward:
He became the chief-deputy prosecutor of the Prosecutor’s Office in district XI and XII.

Katalin Vámos Dr Szabadváriné, the approver of Hagyó’s custody
Her role in the BKV case:
As the chief of the Department of Special and Economic Investigations of Budapest High Prosecution she has a key role in the BKV-case and in the rest of the investigations involving more companies in Budapest in 2009. When in 2009 Tarlós turned to the Chief Prosecutor in connection with the severance pays paid by the BKV, the case was immediately assigned to Szabadváriné. The arrests in connection with the BKV-case were initiated by Szabadváriné and her colleagues. Moreover, Szabadváriné personally signed the documents related to Miklós Hagyó’s pre-trial detention. Besides, she was also responsible for more lawsuits against the rest of the companies of the capital.
Her reward:
After the prosecutions, she became one of István Tarlós’s chief advisors with a competitive salary and other benefits. She took this position, however, by the name of her husband, giving the impression that she aspired to conceal her earlier activities. Since then besides her 800-thousand-forint-salary - Szabadváriné has received quite a high premium more times a year. In 2013 having been hired for only a couple of month she received a premium of 800 thousand forints, and later in the same year a premium of 900 thousand forints. In 2014 she pocketed a premium of 500 thousand forints from Tarlós.

Maria Szívós, sending Hagyó into custody
Her role in the BKV case:
As the chairman of the council of the Metropolitan Court, and later as the member of the Constitutional Court Mária Szívós had multiple roles in the BKV-case. She had a decision role in the pre-trial detention of the defendants – although the reasons behind her decision were highly questionable - and the automatic prolongation of the pre-trial detention. As a result of her decisions more of the defendants spent their time in pre-trial detention in unacceptable circumstances. Finally, as constitutional court judge she delayed the access of the accused to the trial by an impartial judge by adding her requirements.
Her reward:
Although it was also confirmed by Strasbourg that Szívós committed professional mistakes in connection with the BKV-case, in June 2011 the two-thirds Fidesz parliament appointed her to be the member of the Constitutional Court. Thanks to her appointment she managed to avoid her retirement, which would have become due in months. Actually with the abolition of the retirement age limit for the constitutional court judges she gained four years and a salary of 66 million forints. As a result of the above even during the elections in 2022 she will be in the position to add her requirements to all the important constitutional court decisions.