If it is up to the prosecutor, Hagyó will be never released

According to the prosecution authority in case of eight accused the charge of continuous breach of fiduciary duty through organized crime is factual therefore the prosecutor requested for their heavy prison sentence and the exclusion of their release on parole in his prosecutor speech.

In case of Miklós Hagyó, Attila Antal, Zsolt Balogh and Miklós Regőczi the fact that the sentence for engagement in organized crime was raised from 20 to 25 years has not only theoretical significance – said Prosecutor János Homonnai representing the Prosecution - when at the end of his prosecutor speech he itemized the charges against each accused and the sentences he is requesting for them after closing the prosecution’s case-in-chief at first instance. According to his opinion in case of Miklós Hagyó, Ernő Mesterházy, Attila Antal, Zsolt Balogh, Miklós R., Ottó L., Éva M.-H. and Miklós H dr. the charge of engagement in organized crime – threatening the accused with double sentence – and the act of causing continuous and extraordinary material loss are well-based. 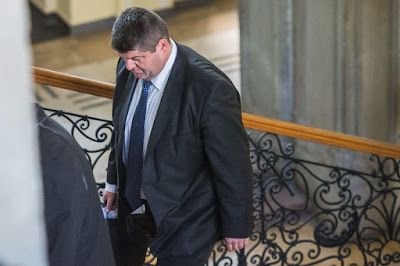 
In case of Hagyó and his co-defendants István Kocsis pressed charges in 2009, when Eleonóra Szalainé Szilágyi’s “outrageous severance pay” was one of the greatest scandal picked up by the press. István Kocsis headed up the BKV after being in charge of the Hungarian Electricity Ltd, and he wanted to begin his new job with a throughout clean-up. It turned out that not only Szalainé as executive received an amount of severance pay that the average person can hardly imagine. The confidants of the chief executive officers changing each other fast could also leave with a severance pay of tens of millions after a couple-of-month work. Besides the severance pays, other – apparently illegitimate - payments were arranged, as well, based on contracts and orders which were unnecessary and overpriced. These provided the very base for the indictment, according to which the 15 accused have caused a damage of approximately 1 milliard forints to the BKV while 1700 employees were dismissed from the company.

The indictment contains dozens of complex and hardly memorizable counts – however the overall vagueness of the Hagyó-lawsuit was created by the Nokia-box story, which also had a great influence on the results of the elections in 2010. Zsolt Balogh, who was the assigned Chief Executive Officer of the BKV at that time, gave the following statement: Hagyó as the Deputy Lord Mayor being responsible for the control over the BKV demanded 15 million forints from him on a yearly basis. According to his then statement Hagyó blackmailed him abusing the fact that Balogh had issued false certification for payment on the preparations for the inoperative Customer Information System of the HÉV suburban railway in Szentendre, although he was instructed to do so by Hagyó itself.

Not only to the investigators but also to the Magyar Nemzet and the News Television in an interview before the parliamentary elections did Balogh state that he had handed over the 15 million forints twice to Hagyó – once in a Nokia-box. And such a statement took everything in the opinion of the public, although this is the weakest part of the indictment. This specific count was based on only Balogh’s statements which were actually contradictory. In the investigatory phase Balogh gave a statement providing also revealing information in connection with other cases, and among others he incriminated himself, as well. Besides, he agreed to the contested hearing with Miklós Hagyó. “Despite his statements, he is sitting here, although he has hoped something in return for his revealing and factual statements.” - said Homonnai in his prosecution speech.

Balogh was not the only one giving revealing investigatory statements. The indictment is also based on the detailed statements given by Attila Antal, Zsolt Balogh, Éva M.-H. and Miklós R. Supposedly, they thought that being honest and letting the authority know about the pressure they had been exposed to they could improve their situation. Thus, according to the related statements and the indictment they had acted at the instructions of Miklós Hagyó and Ernő Mesterházy, advisor of Demszky Gábor, the Lord Mayor. Among others, Éva M.-H. also stated that not only the accused but László Puch from the MSZP and Gábor Demszky, the SZDSZ related Lord Mayor, had also submitted their wishes – however, this part of her statement has been ignored by the investigatory authority. János Homonnai explained the fact that the earlier talkative accused withdrew their investigatory statements before the court and they gave new ones with their disappointment at not being rewarded by the Prosecution for their honesty. It might not be surprising, that they not only withdrew their statements but they also made apology to Hagyó and Mesterházy for them. In March, 2015 Balogh was the last one who withdrew his statement on the Nokia-Box after watching the video of his contested hearing with Hagyó in the case.

According to their political orientation the media raised different points of the case. For example, did the National Office for the Judiciary have the right to assign the case to the Court of Kecskemét? The court of Kecskemét once – around at halftime – almost gave back the case. Finally the trial at first instance proceeded there. It was also highlighted by the media that the accused were influenced by the police, they gave their statements under coercion – that is why they withdrew them before the court. On the other hand, their interrogations took place in the presence of their lawyers and during the investigatory phase no coercion was reported. The fact that Miklós Hagyó won the related lawsuit in Strasbourg supported the truth of the accused: the European Court of the Human Rights found it supported that the accused was kept under humiliating conditions and he was kept in detention for a longer period than the reasonable.

The Prosecution has committed several mistakes: first of all they failed to investigate from whom Balogh had received the two times 15 million forints – and when they did the investigation did not bring any results. It seemed that only when announcing the court decision would it turn out if the statements given before the court could override the vivid investigatory statements. The prosecutor representing the Prosecution is the third in the line. János Homonnai emphasized: the seized correspondence found in the computers provides enough evidence that the truth was told the investigatory statements of the accused. Since according to the indictment Hagyó and Mesterházy did only give instructions and they did not sign anything, the charges relating to their “feudal lordsih” behaviour might be refuted.

However, the major content of the original indictment has well survived so far. The charge of blackmail against Hagyó was dropped unlike the charge of two counts of bribery. The question now is if it will be supported by any evidence before the court. Szalainé’s 86 million forints is not a fraud anymore but legal benefit. Ottó L.’s misuse of firearms is not a crime but minor infraction – and as such it lapsed. Due to the change of the relevant legislation in case of certain accused the damage caused by them is currently under the limit of extraordinary.

The court decision can be influenced by the statements gave by the experts during the case-in-chief according to which it had not been in vain to pay millions for the plagiarized study since the executives could inform well from it. The court can also consider the fact that the charges were pressed by István Kocsis, who himself is the accused of a delayed case in relation to the disappearance of 15 billion forints. One of the witnesses has told: since Hagyó and his co-defendants the practise is actually similar at the BKV – the studies and the marketing cost the same price as the accused paid for them before, and it is hard to decide in advance if they are really necessary at all. Besides the time passed, can it be considered as extenuating circumstance that the others presently do the same as Hagyó and his mates - although there is no more a righteous István Kocsis, who would press charges against them?