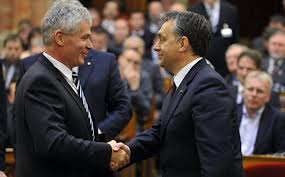 In September Tünde Handó, at long last, might be home and dry with one of her first decisons made right after she took office in January, 2012. The „Hagyó-case” did land in Szeged as it had been planned by Handó from the very beginning. Despite the decision made by the Constitutional Courd and their clear opposition, in the proceedings started the second time the only destination of the case could be Szeged. Perhaps, at the attempt to understand the ’why’ it could be useful to know that Attila Harangozó – the only candidate for the position of President of Szeged Regional Court of Appeal and then appointed by Handó – at a press conference referred to the President of OBH as his employer and he described the European Court of Human Rights in Strasbourg as gentlamen’s club. After all, it should not be at our suprise that Péter Polt’s prosecutors in Szeged are eager to carry out their duties accordingly. And what are these duties exactly?

In summer, 2016, the decision given at first instance by the General Court of Kecskemét was received by Zsuzsanna Dr Kaszáné dr Horuczi, public prosecutor of Szeged competent in the case. Around the same time the prosecutor was awarded the Magyar István-prize by Péter Polt. For what the prosecutor made recommendation? To start and complete a full investigation - the third time – into the case of bribery taking place by means of the Nokia box. To hear everyone involved in the case as witness and ensure that again Hagyó be the only single suspect in the case, in which the court of first instance acquited the ex-deputy Lord Mayor. Interesting to note that by this time the case has been shrunken to a 15-million bribe.

The first investigation took place between February, 2010 and October, 2011. It took almost 20 months, in other words 600 days. After the presentation of documents and the arraignment, the second investigation, uniquely, was conducted simultaneously with the trial itself in Kecskemét. The proceedings were quite detailed and lenghty. It took place between November, 2012 and June, 2015, through 33 months. It means almost 1000 days, however the investigation was closed without results. All in all, out of the 7 years and 3 months passed since February, 2010 when Zsolt Balogh made his investigative statement, the investigation took 4 and a half year, 53 months, which means almost 1600 days. Without result.

As a reminder, I would like to quote what Zsolt Balogh said in front of the wide public at the trial in March, 2015.

„I do not maintain my statement given in the course of the contested hearing. I made it with the same reason I made the invetigative one: to avoid being arrested as the other ones involved in the case had been. I was convinced that my freedom was guaranteed if I said seriously incriminating things to Miklós Hagyó. During the contested hearing I did claim 14 times that I was afraid of Miklós Hagyó and I refused to provide answers to his lawyer’s question with the only reason to underline my statement. Honourable Court! I did not commit any crime, Miklós Hagyó did not instruct me to commit any illegal act, I did not hand over any amount of money to him. I am deeply sorry and I owe Miklós Hayó apology for all my statements I made with the aim to indicate the contrary due to the earlier mentioned conditions.”

Of course, it should be everybody’s own subjective opinion they have of Hagyó. However, it is the objective reality what happened to him, and unfortunately, it can happen to any of us today, here in Hungary.

In spite of asking forgiveness, based on the statements made by any individual – even if there is no evidence to support – today, in Hungary anybody can be dragged through the mire - even three times.