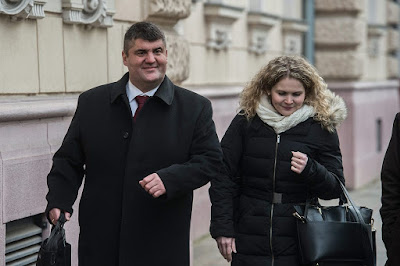 The charge against Ernő Mesterházy (ex political chief advisor of the Lord Mayor), second accused, was dropped by the judicature presiding by Ibolya Hadnagy. According to the explanation of their decision in his case only one act of incitement without result could be established.


Attila Antal, third accused, former Chief Executive Officer of the BKV was sentenced to one-and-a-half-year imprisonment suspended for three years by the court for continuous breach of fiduciary duty and abuse of falsified private documents.

Ottó Lelovics, fifth accused (ex communications advisor of the cabinet of the Deputy Lord Mayor) was sentenced to one-year-two-month imprisonment suspended for two years for continuous breach of fiduciary duty.

Charges against Éva Mátay-Horváth, sixth accused (former press referee of the DBR Metro belonging to the BKV, later also assigned communications advisor working together with Hagyó) were dropped. According to the charge the accused was unreasonably paid by two employers at the same time, however the court stated that it could not be established that her employment with the BKV was fictive.

However, charges against Eleonóra Szalainé Szilágyi, former Director of Human Resources of the BKV, and other three accused were dropped.

The court obliged Miklós Hagyó, first accused and Zsolt Balogh, forth accused to pay 39,6 million-forint damages jointly and severally to the BKV in 30 days after the final decision becoming legally binding. Attila Antal and Miklós Regőczi were also obliged to pay damages: they have to pay approximately 10 million forints jointly and severally. The charge of receiving two times 15 million forints against Hagyó was dropped in lack of evidence.

According to the court in certain cases of the prosecutory submissions the act of breach of fiduciary duty could not be established, even if some of the tenders had been won with “friendly” support.

Differing from the indictment the court found not guilty the third and the forth accused of signing employment contracts of considerable amount, which after quite a brief employment entitled the managers leaving the public transport company for severance pay of millions. According to the justification it is the usual practice at the BKV Ltd.

In the case of CC Soft Ltd – responsible for the development of passenger information system of the Szentendre suburban railway – the judicature condemned Miklós Hagyó since abusing his influence he committed breach of fiduciary duty. According to the charge the former Deputy Lord Mayor instructed Zsolt Balogh to pay the contractual amount before the final implementation of the new system. The justification of the decision is expected to last all day long, and only after the accused and the prosecutor can bring appeal if they wish.