Hagyó Miklós’s name was mired in the beginning of the BKV case – when they couldn’t even talk about reasonable suspicion. In the right party media (which was controlled and supported by politicians from the right party) there were news which stated that they have proofs about Hagyó’s malicious.

The citizens who were only interested as a layman or they were just listening the news as an”ambient noise” could get very fob easily, we are not really surprised on this. But we surprised that for the MSZP – where Hagyó was hustling/working from 1998, at the age of 31 – this was enough to ask him to stand off/resign in the beginning of February, 2010. The defense of the innocence and the personal knowledge during the common works weren’t even enough in the light of published media.

As the then articles said: „According to the press information, Antal Attila made an incriminating statement against Hagyó Miklós, the former CEO of BKV who were suspected with a misappropriation, and Balog Zsolt the former temporary leader of the company.”
„The MSZP got the information/learned from the media, that the former CEO of the BKV made a statement against the former lord mayor (she wrote here lord mayor, but he was deputy lord mayor…). The not-traversed leak means that Hagyó Miklós will be a defendant. Here the role of the politics are ended, the legal process will take years – said the metropolitan vice-president of the MSZP.”

With a solid vote they decided that they don’t want to incriminate/charge the MSZP with a case like this, so they asked him to resign from the nomination of the individual representative, and to resign about his „list place in Budapest” and his mandate in the capital general assembly.

Then, from an interview in Népszava: „until the end of the week the MSZP wants to close this case. According to our information the party will wait for his answer until Wednesday, if the answer will be no, or he not deciding they will start the former process, with that, they will take off his name from both list. At the same time they can’t deposal him from his mandate in the capital general assembly, about that only the representative can decide.” 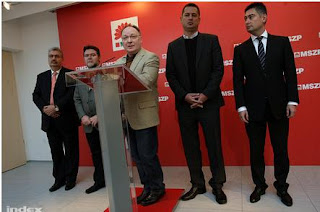 The MSZP justified their decision of their presidency (with what the then president of the party and the national leadership agreed): „although they believe in the innocence of their party partner, but because of the political status which evolved around him they asked him to resign, because the interest of the party is more advanced then the personal interests.”

The party even in the beginning of the case made a distance from Hagyó, then years later, on the 25th of March, 2012, Szanyi Tibor, the socialist representative of the parliament said in his interview to the MTI in the reference of/about Hagyó Miklós: „with what they suspect him, he is absolutely innocent, he never seen the Nokia box, not even a small one, not even a big one.”
So then, how is it?