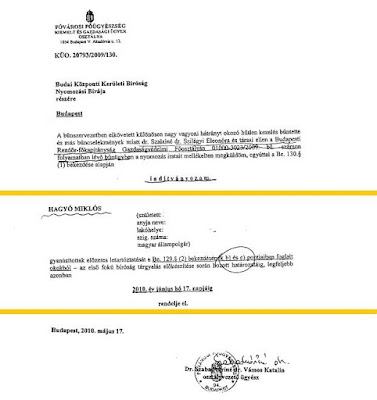 
Szabadváriné Dr. led the Department of Special and Economic Investigations at the Budapest High Prosecution Office by the name of Katalin Vámos dr. She was the prosecutor who in May 2010 requested the court for Miklós Hagyó’s, former Deputy Lord Mayor of MSZP’s. Hagyó was taken into custody and kept for 9 months. Later Hagyó was awarded of around 4-million-forint damages for the unacceptable conditions of his being kept by the European Courts of Human Rights in Strasbourg.

The name can be familiar from somewhere else too


Szabadváriné’s name can be familiar from earlier, as well: in 2004 she represented the prosecution in Csík Rita’s, journalist for Népszava’s, case accused with breach of state secrets. This was the case because of which the Freedom House – the American organization ranking countries from the perspective of press freedom – raised concerns in its report issued in 2005, highlighting that the number of lawsuits brought against journalists is high in Hungary.


The journalist published a letter having been written by Sándor Sutka, Chief of Police of the County Hajdú-Bihar to the County Deputy General Prosecutor in which Sutka had raised his suspicion that Lajos Kósa, Mayor of Debrecen, might have been involved in a crime organization. The journalist publishing the letter containing groundless suspicion according to the prosecution was acquitted in 2007, reasoning that she had not been aware of the fact that by publishing the letter she had committed the crime of breach of state secrets.


Later, in 2009 Szabadváriné became involved in the case of the UD Ltd – in one of the minor episodes of the quite tricky story she announced at a press conference that the department led by her revised and rejected the complaint submitted by the former chief director of the Office of the National Security Council. Sándor Laborc raised objection against dropping the investigation initiated due to the suspicion of possible computer attack against both the system of the National Security Council and the main governmental system in relation with the UD Ltd reported to the police by him.


Investigations in connection with companies in Budapest


Department of Special and Economic Investigations, designed after a similar department working at the Prosecutor’s General Office, was first lead by Sándor Ihász, the prosecutor interrogating Attila Kulcsár, the pseudo-broker becoming famous in the K&H case. The department responsible for about the 90 percent of the special investigations in the capital was taken over by Szabadváriné in the summer of 2009.


That was the time when the already mentioned BKV-scandal broke, which case was later often referred as the Hagyó-case after the first accused. Since then in the case of the former Deputy Lord Mayor of MSZP and his mates there has not been decision made by the court of first instance. Later, in 2010 reports were made to the police after each other by the Fidesz - meaning the Opposition in Budapest at that time- on suspicious “businesses” carried out by public utilities in the capital.


First, the investigations into the cases of the related companies were conducted by the Department of Economic Protection of the BRFK, then they were taken over by the Department of Special Investigation led by Szabadváriné at the Budapest High Prosecution Office. The related cases involved FKF, Főkert, Budapest Bath Board and the Főtáv; only in the case of the latter there was a court decision made – in the favor of Főtáv.

She was transferred, then she finally left the organization


After the prosecutions brought against the public utilities, in August 2012 Péter Polt, Prosecutor General, transferred Szabadváriné. According to the prosecutory journal, however, something more took place: after being responsible for a considerable department she was demotioned to a simple prosecutor and transferred to the High Prosecution Office of Pest County from the Budapest Prosecution High Office.  A couple of months later on January 31, 2013 her service was terminated by Péter Polt.  The reasons behind her termination and the fact if she was the one asking for her termination remained uncovered. Anyway, Szabadváriné is not a prosecutor anymore.


She became employed by Tarlós the day after

Her unemployment was a short-term one: by the name of her husband, Péter Ottóné dr. Szabadváriné, she began to work in István Tarlós’s office as of 1 February 2015. She became employed as Municipal Chief Advisor with competitive salary in a team working directly under the Lord Mayor.

After the article about the advisors published by the Origo, the City Hall was anxious to immediately react, emphasizing that last year the advisors were rewarded only once and not all the advisors were involved. However, during the time of Gábor Demszky, Tarlós’s predecessor, the advisors were often rewarded two or three times a year. At the beginning, Tarlós must have followed the same practice, at least according to the reward list of 2013 – which was published by the Átlátszó.hu – the newly joined Szabadváriné was awarded twice – first she received 800 thousand forints in August, then 900 in December. In 2014 Szabadváriné was awarded only once, she received only 500 thousand forints in May.


Not only the former prosecutor was employed


Szabadváriné is not the only one who was involved either in the Hagyó-case or in the investigations against other companies in Budapest on the side of the related authorities, and then was assigned to an important position at the City Hall after István Tarlós electoral victory in 2010. Gábor Tóth, then Police Chief in Budapest – after being removed by Sándor Pintér, Minister of Home Affairs – became the leader of an ex-project team on Budapest’s public safety at István Tarlós’s invitation.


After his retirement in 2004 and his private investigator activity, the reactivated former investigator specialized in economic protection, Ottó Halász, also worked at the Department of Economic Protection of the BRFK – initially responsible for the BKV- and Hagyó-case - as Chief Advisor in 2010.


Halász on May 14, 2010 took part in Miklós Hagyó’s interrogation. He also appeared when Péter Bielek, former Chief Executive Officer of FKF, was interrogated on July 21, 2010, and he also presented himself during Lajos Kovács’s, former Chief Executive Officer of Főtáv’s, interrogation in August and October, 2010. Furthermore, Gábor Demszky’s, former Lord Mayor’s, only interrogation taking place ever in the related cases was conducted by him in connection with Főkert Zrt. Shortly after, Halász became the deputy director of the security board of FKF Ltd. His superior’s name can also ring a bell: Endre Jónás who was a counter-intelligence agent until 1988, then he led the counter-terrorist service of the secret service for 13 years, and he was the Chief Director of the Office of National Security Council for a shorter term (according the situation existing on the 1st of March he is not a director of FKF anymore).


It was revealed earlier by the Index.hu that the monthly salary of the approximately-30-member security board is 13 million forint. The company provided the portal with the following official explanation of their recruitment process: our colleagues are selected based on their qualification, relevant experience, eligibility and subjective skills – any activity in the BKV- or any above mentioned cases was not among the criteria.


Pető made the greatest carrier 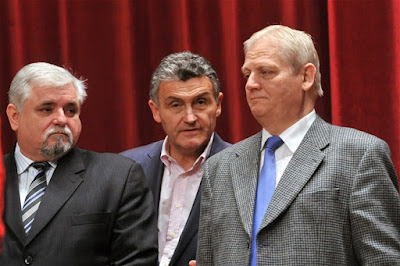 The most well-known case is György Pető’s, who in retired status was an active investigator at the Department of Economic Protection of BRKF until October of 2010 and this way he gained an insight into the BKV-investigation. István Tarlós knew Pető, who worked as counter intelligence agent in the III/II team of the Ministry of Home affairs between 1979 and 1983, for a long time since when Tarlós was the Mayor of Óbuda, Pető was his Deputy Mayor in the colors of the MSZP. After a time the former national security agent became the victim of the internal wars among the socialists, then he left MSZP. First, he established a basic organization of the MSZDP, later he became the Chief of the Cabinet of Gyula Molnár, socialist Mayor of district XI. After their relationship broke, he left the scene of local politics and he returned to the police. This was the time – in 2010 – when Pető established a police information network. He roped in persons becoming directors of companies in Budapest after the election to be informers – revealed the Index.hu in 2011. After István Tarlós’s taking office he became the director of the Security Office of Budapest – often referred to as the FBI of Budapest – then of the Board of Municipality Law Enforcement of Budapest.