While the Judiciary is Gagged, the Public is Blind

Even while under major scrutiny from the European Parliament and the U.S. Helsinki Commission for shady backroom politics, Hungary still persists on operating behind closed doors. 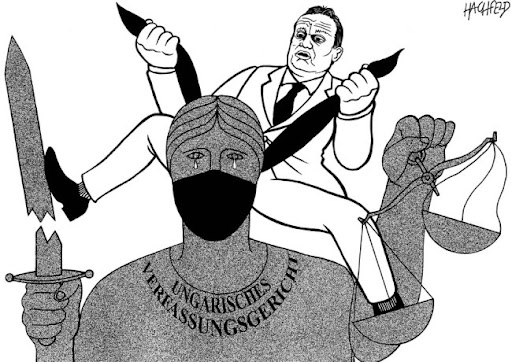 Just last week I wrote that the Constitutional Court had summoned President of the National Judicial Office (PNJO) Tünde Handó to provide a testimony in connection with her decisions to transfer certain trials from one tribunal to another. This is considered an alarming capability since courts usually represent a specific place on the political spectrum.

According to a fresh report from Politics.hu, the April 23rd hearing will now occur behind closed doors.

This was seen by many as the Court’s defiant stance to the persistent onslaught from Orbán loyalists who have been conspicuously placed in directorial positions of major government institutions, including the Court itself.

Handó, or the judicial “czar” as she was labeled in an article from the New York Times, is the top administrator in the Hungarian judicial system, and she therefore wields judicial super powers which many claim seriously undermine the independence and objectivity of the court system.

The Hagyó Case was transferred from the Budapest court system to a court in the smaller city of Kecskemét. Critics have been vociferous about this because Kecskemét is notably sympathetic to Fidesz, and the case was transferred after the main defendant, former Socialist Deputy Mayor of Budapest Miklós Hagyó, had already been acquitted of forgery charges in the Budapest courts.

The forgery charges were related to the nine months he spent in pretrial detention in connection to the current trial.