The Szeged Court recently decided that the BKV case will continue at the Kecskemét Court, according to an article on mno.hu.  The fifteen defendants in the case, including Miklós Hagyó, requested that the trial undergo a pause while they petition the Constitutional Court on the legality of the case transfer from the Municipal Court of Budapest. 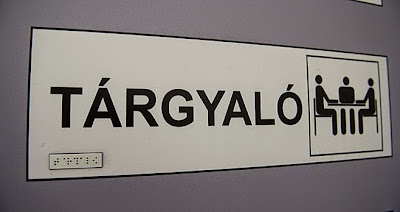 This appeal was first rejected by the Kecskemét Chief Justice and secondly by the Szeged Court.  According to the defense, it is very expensive for the defendants to continuously travel back and forth to Kecskemét since many among the defense reside in Budapest, a distance of approximately 91 kilometers.  Additionally, the neutrality of the Kecskemét Court has been questioned since it has ties to the Fidesz party, according to the defense.
As I have mentioned before in a previous post, Miklós and his associates face charges of aiding and abetting.  The prosecution claims that while Hagyó was Deputy Mayor of Budapest, and was subsequently responsible for the Budapest Public Transport Company, his activities caused 1,5 billion Hungarian forint (5,5 million Euros) in financial damage to BKV.  He is accused of the methodical misuse of public funds by intimidating the BKV management into fabricating contracts which were supposedly beneficial to his or his partners’ business aims.
Initially, the problems with BKV arrived because of a routine audit conducted by the State Audit Office (Állami Számvevőszék).  The auditors noticed a string of employment-severance packages, which turned out to be quite suspicious.  Why the suspicion?  It was determined that the recipients of these financial agreements were still employed by BKV.  Notably, the Human Resource manager at the time, Mrs. Eleonóra Szilágyi Szalai, had denied the charges against her before the Kecskemét Court on July 14th, 2012.  According to an article on nol.hu, Mrs. Szalai received 86 million forint (around 308,000 Euros) as a base severance payment, but the package also included various bonuses and a confidentiality payment.  However, she doesn’t understand what the problem is with the severance payment which she received.  Eleonóra stated that she considered it an “established custom” for someone to receive a “due” which had been agreed upon within a contract.  In addition to customs, she thought it normal for someone to retire, yet continue to work.  In fact, she said that she knows of at least 25 other people who have done the same, and if it is a “sin,” then why is she the only recipient to face charges.
An article on Origo.hu notes that during her first court testimony, Eleonóra stated that she had re-signed a contract with BKV and Aba Botond, then the acting director of the transport company.  At that time she had worked her way up to the position of the Human Resources manager – Szalai started working for the company in 1972.  Apparently they had documented in the new contract that if she were to leave, in agreement with the company (thus retirement), she would receive fourteen months of salary and 100 days of leave.  Eleonóra mentioned during the same statement that she and the company were willing to sign a statement of retirement, or severance agreement on her behalf, many times, but because BKV still lacked a replacement for her position she had stayed to fulfill the duties.