On Tuesday the trial of the eleven associates of the Budapest Public Transport Company (BKV) continued at the Kecskemét Court with the review of Mr. Attila Antal’s testimony from last week and a brief response from Mr. Miklós Hagyó. 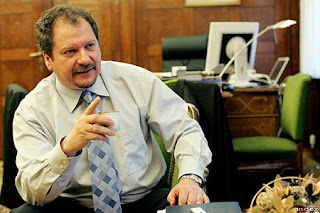 Antal continued to withdraw his previous statements from a 2010 interrogation, when under alleged duress from the police, he verbally incriminated Miklós Hagyó, Ernő Mesterházy, and other defendants. The 2010 statements were, thereafter, used by the interrogation authority and the prosecution in charging Miklós Hagyó, among others, with misappropriation of public funds.

It is speculated that the accused forced BKV upper-management to negotiate and approve a series of contracts under the guise of the public transport company with persons or organizations that were not considered appropriate for the contracted tasks, but instead were directly or indirectly profitable for Mr. Hagyó.
Though one might think that Mr. Antal had exhausted his current testimony last week by renouncing his 2010 statements, in yesterday’s hearing he answered new questions neither from the defense attorneys nor from the prosecution. Instead, at the urging of Judge Katalin Kutron who sought to record the entire testimony into the court’s official records, he once again returned to the 2010 events. This time, however, he elaborated on his motivations for his original accusations against Hagyó, Mesterházy, and the other defendants.
During the February 4th, 2010 interrogation Antal was recovering from a heart attack, which had required of him a resignation from his post as CEO of BKV. So, according to the former executive, when the police held him in custody during the 2010 interrogation he feared that he would not recover his full health under such circumstances. In that state, Mr. Antal provided for the police, what he said was, their desired accusatory evidence against the other defendants.
Apart from the requested repetition of his story, Mr. Antal did provide for the court new elements of the 2010 circumstances. He stated that he did, in fact, initially provide an “honest,” or otherwise unincriminating, testimony to the police. At that point the police, he claims, refused to grant him leave from the police station until three days later, when Antal verbally accused Hagyó, Mesterházy, and the other defendents.
Mr. Hagyó followed Antal in providing his opinions on the 2010 events. The former Deputy Mayor of Budapest said that he had met Attila Antal prior to the BKV scandal on a few occasions, when he perceived Antal to be of “honest” character. Though Hagyó did not understand why the former CEO accused him in 2010, thus, according to Hagyó, betraying those “honest” characteristics, Miklós professed his content at seeing the “real” Attila Antal in court.
Mr. Hagyó and his defense expressed their disapproval at not being provided the opportunity to confront Antal about his accusations prior to the current trial. According to Miklós’s attorney, this would have permitted both parties to sort out the “contradictions.”