Today’s post is certainly off-topic since the trial against Miklós Hagyó is awaiting the September 11th hearing.  However, I will soon be able to put up some character profiles of the other major players in this Hungarian scandal. 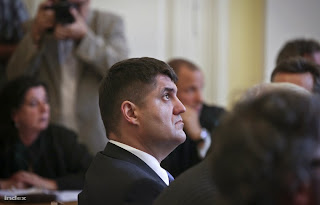 Meanwhile, for those of you who are interested, I was traveling in western Hungary, a sort of village tour, in some beautiful cities near the Hungarian-Austrian border.  Places such as Körmend, Szombathely, Szentgotthárd, and Ivanc were interesting steps into the lesser metropolitan Hungary, such as Budapest where I frequent.
Support for Prime Minister Orbán, his Fidesz cronies, and the ultra-nationalist Jobbik seemed to be the popular taste within these smaller communities.  I chatted with a few locales within these places who told tales of diminished industry, lost jobs, inflation, and increased poverty, so the nostalgic cry of a stronger Hungary was commonly heard.  With Hungary’s unemployment rate around 11.5%, and likely to further rise, their struggles are understandable.