Demszky hopes, that the truth will unravel once

Demszky hopes, that the truth will unravel once

Demszky Gábor, the former lord mayor on a Monday’s program/event criticized the investigations, wherefore they dragged/mired a dozens/lot of people within the confines of a political motivated process. The former SZDSZ politician’s convictions, that everybody will be relieved in the case, as it happened in a lot of case. 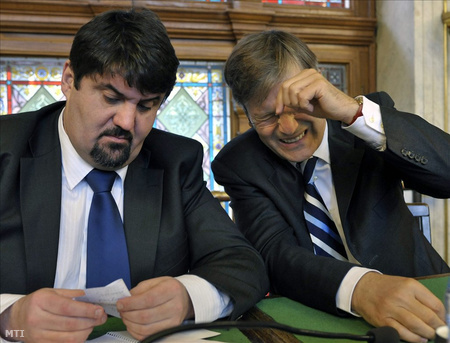 „It was a composed, planned series, which was made for a political purpose and they achieved this purpose. I think it’s unforgivable, that they dragged/mired dozens/lot of people, and they suspected them and denigration them” – said Demszky Gábor, on the event of the Liberal Club/Association of Buda, (the exact translating is club but it’s like an association) on Monday evening.

Apropos of a question he said, that he had political arguments with Hagyó, and a lot of thing would have happened differently, if the metropolitan coalition would break up earlier, but he thinks that his former deputy didn’t commit any crime.
He said that he accepts Antal Attila’s - former CEO of the BKV – apology what he said in from of the court. The former CEO of the BKV in front of the court he said that he was saying incriminating confessions/statements not just against Hagyó Miklós and former advisor, Mesterházy Ernő but he also said incriminating confessions on Demszky Gábor too, because the investigations made him sense/pictured him that if he is not going to say suitable/right confessions, he can count on a long pre-trial detention. The former politician said/remarked that he wasn’t questioned even as a witness.
He added that he thinks the process of the BKV’s case is cynical. As he said: the experiments show that the political PR’s (public relations) most effective method/device is the counsel. He mentioned that in a few eastern’s countries a criminal procedure was became a part of electioneering in several cases, he named like this the Poland of the Kacszinszky twins, or Bulgaria, where they also influenced the outcome of the elections.
According to the former lord mayor that the charges are melts/disappears serially, it is shows the political motivation of the case. However he thinks that a case like this can be drawn out even for five years, and in the end vainly turned out that everybody was innocent, by that time they ruined dozens/lot of people life.
He brought up that a lot of his former co-workers were taken to the police/in front of the police, but the cases didn’t even reach the accusation. Even so because of the State Audit Office of Hungary’s earlier prosecute, the concerned (people) were/featured on the covers as criminal offenders, but no member/no one communicated/said that the process had been ceased/canceled.
„I hope once it will unravel what happened, how it happened, who planned it/thought out, who participated in, who gave an order for this” – said/stated Demszky Gábor. The former lord mayor said: now he just believes in the court’s independence, because nothing else left what can be believed, „although it can be naivety.”